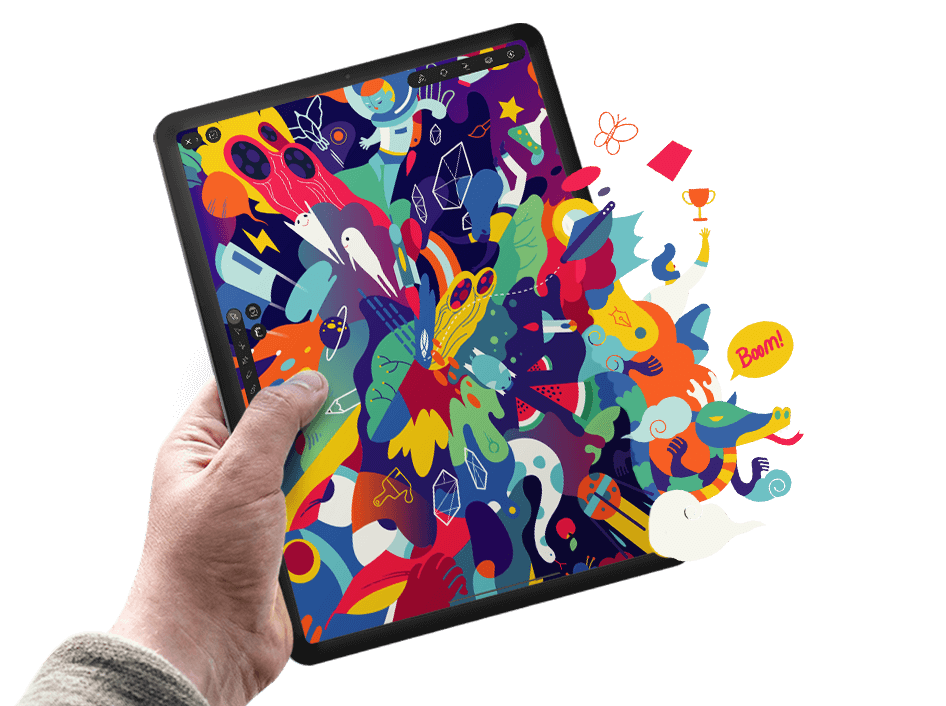 ‍
Since Apple released the iPad with the Apple Pencil it became a powerful tool for designers. Today we want to discover the numerous opportunities to do iPad graphic design and additionally give some recommendations for great graphic design apps for the iPad.

Businesses and professionals prefer to rely on iPad Graphic Design primarily as it is seen as the foundation for all design and enables the creators to work in a more natural manner with a stylus compared to working on a desktop. Designers actually typically always begin their illustrations on the iPad and unless they want to export their designs to another software or provide advanced finishing touches, they tend to finish them on the iPad as well.

Apart from these two use-cases, there’s always the creative type of people who like to indulge in their hobby of Graphic Design. For these people, the iPad is the perfect device. If you are stressed, want to wind down or just have something to do on your commute, the iPad is a very convenient device to carry and pull out whenever you see it. Not only is it lighter compared to a Macbook or another laptop, but it also enables people to fully dive into their designs by literally sketching, drawing or creating paths.

Some iPad Graphic Design softwares like Vectornator use innovative approaches like employing levitation design in order to give a “floating” aesthetic that appeals to the users. As a result, there are a lot of reasons why designing on iOS devices like the iPad is more convenient for several different types of people, easier and more fun.

Can you do graphic design on an iPad?

Definitely! An iPad equipped with a stylus and a good graphic design app allows everyone to create beautiful illustrations, layouts, and logos.

On one hand, an iPad offers you the flexibility to design from everywhere you want. It is easy to transport, the battery has a good capacity and the screen resolution is great for graphic design.

Most people expect that graphic design apps for the iPad are limited by their features. But this isn’t most of the time true. The apps often offer numerous features we already know from software like Adobe Illustrator on your desktop.

But on the other hand, this is sometimes a problem. Offering a great bandwidth of features while often having poor shortcut options is hard for professional designers who used to speed up their design process by using shortcuts on their desktop. While even most iPad graphic designers don’t have a keyboard attached.

This definitely needs to be considered when designing on a mobile device like the iPad.

‍
"Great apps on iPad offer easy to use and intuitive UIs to speed up the design process and make it much easier to use different features by just a few taps."

Here are some Inspirations of creations made with Vectornator which is a graphic design software for iPad, iPhone, and Mac:

If you just aim for the biggest size, highest resolution and having the ability to use the 2nd generation of the Apple Pen, then you should go with the third-generation 12.9 inch iPad Pro.

For us, it really depends on the specific use case. If you love for example drawing while taking the train then a smaller and lighter iPad Air is probably the better choice.

Check out our little comparison of great iPads for graphic design:

‍
Apple’s flagship is equipped with everything you need to do professional graphic design on an iPad. Coming with the industry-leading 2732 x 2048 Liquid Retina display, ProMotion technology and the ability to use the second-gen Apple Pencil.

The little brother of the previously discussed 12.9-inch iPad is great for people who want a powerful tool for iPad graphic design while having a much handy solution.

Apple’s thinnest iPad comes with a light and slim design while providing a good price-performance.

The iPad 10.2 is the newest version of Apple’s classic iPad. Equipped with everything you need for working, studying and designing.

What is the best graphic design app for the iPad?

It can sometimes be confusing to figure out which graphic design app would suit your needs the best.  There are several graphic design apps for the iPad. They all come with different features, interfaces, and functions.

Now that we’ve discussed how iPad Graphic Design has a wide application and appeal for all kinds of users, it’s also important to talk about what kinds of design tools currently exist. That is why we are going to provide you with some great recommendations for design.

Here are our picks of some of the best graphic design apps for Graphic Designers!

Typography is one of the fundamental building blocks of graphic design. If you are walking around the city, you can scan any font that you like. The app quickly identified and recognizes the font and additionally presents you with similar alternatives to choose from. The free version of What the Font is the perfect tool for typeface lovers or graphic designers looking to add new typography to their arsenal.

Nothing makes a design pop quite like color. Pocket Palette is an app that enables you to create all customizable color palettes from scratch or from a photo that you can possibly imagine straight from your iPad. You can add or remove the number of colors in your palette and play around with each color’s hex code in order to reach get the shade you want. Another handy feature is that you can easily save all of your favorite colors and palettes so you have them handy right there in your iPad whenever you need to use them in your next design. Similarly to what we suggested for the previous app, the next time you are out and about, take a photo of something that catches your eye, use this app to start creating a color palette out of it.

This is one of the most realistic drawing apps available to iPad users on the App Store today. AutoDesk Sketchbook has a lot of things that other apps do not have. For first timers and designers alike, the natural drawing feeling is well received. There are also several brushes and customization options available. That’s why it's kind of a no-brainer and a top choice for illustrators. To top it all off, the iPad app syncs your work with other devices so that you can move drawings from one to another easily.‍

Astropad turns your iPad into a full on graphics machine. Although this is a very pricy app and might not suit beginners, it is  packed with features for those who are doing a lot of iPad-based illustration. So, it's very well liked by creative firms and professional designers. The app store rating of  4.5 stars out of 5 is a testament to how popular it is. One thing to note is that you need to have a Mac computer.  You can mirror screens with the Mac and the iPad, it syncs via Wi-Fi or USB and finally the app is pressure sensitive, which means it works with a variety of drawing tools and everything you create is high-resolution.

But, there is one graphic design app that is better than the others.

Vectornator X is an intuitive all in one vector graphic design software that enables you to design anything you can imagine. You can create sophisticated illustrations, beautiful designs, amazing layouts — all in one powerful tool. Vectornator does not look or feel like any graphic design tool you have ever used. It combines all the powerful tools, advanced features, and high performance that desktop apps offer with a revolutionary card user interface that is built for the touch of your finger and the precision of your pencil. It enjoyed a high rating on the AppStore, a large community and was also named Apple’s App of the Day at one point. There is more on this particular tool later on this page.

Vectornator stands out in the crowd. Vectornator has been featured numerous times on the App Store and also was App of the Day. Over 2 million people agree with who have downloaded and loved the app. Its 4.7 rating on the App Store is a testament to its mass appeal as one of the leading graphic design apps.

For these reasons, Vectornator is the best graphic design app for the iPad. But that’s not all. Vectornator has a wide range of tools that makes designing incredibly easy. With consistent updates, fixes and improvements, Vectornator keeps users happy and their experience as enjoyable as possible. To add to that, user feedback is closely monitored, documented and  listened to via the community on Spectrum, and a website built specifically for the user’s feedback.

The most crucial tool for any iPad graphic design software has always been the pen tool. Vectornator allows you to seamlessly create precise paths and anchor points with all the sharp edges and beautiful curves.

Vectornator became the first iPad graphic design App offering a feature to automatically vectorize images by one tap. Especially for logo design many designers already use the Vectornator’s Auto Trace.

Vectornator allows designers to get full control over the text's line height, kerning, tracking and more. You could even import all of your favorite fonts into Vectornator.

Most iPad graphic design apps struggle when it comes to importing or exporting different file types. Vectornator allows users to easily import/export .svg, .ai, or .pdf files. Plus, you can even import your Figma projects or Wacom sketches on the Slate.

In Vectornator you can have endless layers to allow you to work on complex designs/illustrations. Having the possibility to add many Artboard can be super useful if you want to design the visual interface of your next app screens.

Working with paths is something really challenging and you might want to join, divide or subtract them using the lovely Boolean Operation to speed up your work.

Soon Vectornator will release Real-Time Collaboration which will allow teams to work together in the same document at the same time. Just like you already know it from Google sheets & docs.

To sum up, iPads are a great tool to do graphic design from everywhere you want while having the natural feeling of a real pencil. The right software is the key to a fast and efficient design process.
As we already said, Vectornator is offering such an experience on the iPad but also on the iPhone and Mac which is one of the reasons why we reached 2M downloads.
And the best thing you can get Vectornator now and start today creating your first illustration on your iPad! 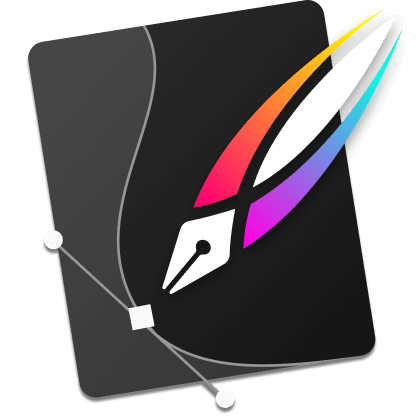